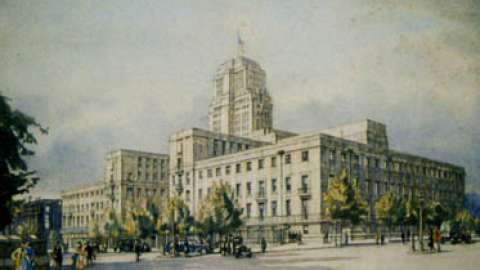 More pages in this section

School of Advanced Study In this section

The School of Advanced Study, founded by the University of London in August 1994 as a federation of nine of the University's research institutes in the humanities and social sciences, was officially opened on 15 March 1995.

Many of its institutes already functioned as centres of international excellence to facilitate advanced study in their respective fields for the benefit of the national and international scholarly communities as a whole.

1997: Opening of the third floor of Senate House

2004-2005: The School celebrates its tenth anniversary

2007: The School announces the successful outcome of the HEFCE funding review

2008: The national mission of the School is redefined

2009: The School moves into new premises in Senate House

2013: The School announces the successful outcome of the HEFCE funding review; the Acton Report declared that public funding for the School would be continued at the current level on the basis of a rolling five-year grant

2015: The School celebrates the twentieth anniversary of its official opening

2018: Research  England Council recommend a further five year tranche of special funding in view of the fact that the School provides clear value for money for Research England’s investment to facilitate and promote research in the arts, humanities and social sciences nationally.

The panel agreed that SAS provides a valuable national resource, facilitating research through the stewardship of unique collections, provision of specialist training for the next generation of researchers, promoting a number of emerging research fields and protecting some endangered ones.

2022: Warburg Institute starts work on an exciting refurbishment project having raised over £5m in philanthropic donations.