We Mark Your Memory: writings from the descendants of indenture 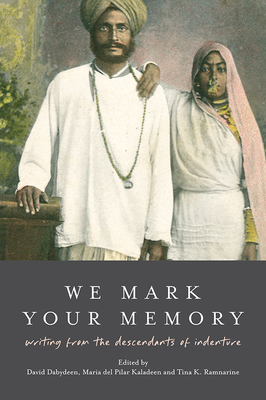 The abolition of slavery was the catalyst for the arrival of the first Indian indentured labourers into the sugar colonies of Mauritius (1834), Guyana (1838) and Trinidad (1845), followed some years later by the inception of the system in South Africa (1860) and Fiji (1879). By the time indenture was abolished in the British Empire (1917–20), over one million Indians had been contracted, the overwhelming majority of whom never returned to India. Today, an Indian indentured labour diaspora is to be found in Commonwealth countries including Belize, Kenya, Malaysia, Sri Lanka and the Seychelles.

Indenture, whereby individuals entered, or were coerced, into an agreement to work in a colony in return for a fixed period of labour, was open to abuse from recruitment to plantation. Hidden within this little-known system of nineteenth- and early twentieth-century Indian migration under the British Empire are hitherto neglected stories of workers who were both exploited and unfree. These include indentured histories from Madeira to the Caribbean, from West Africa to the Caribbean, and from China to the Caribbean, Mauritius and South Africa.

To mark the centenary of the abolition of the system in the British Empire (2017–20) this volume brings together, for the first time, new writing from across the Commonwealth. It is a unique attempt to explore, through the medium of poetry and prose, the indentured heritage of the twenty-first century.