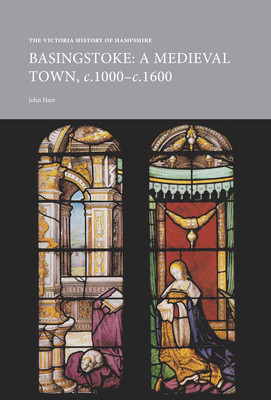 Basingstoke is frequently seen as a very modern town, the product of the last decades of the 20th century. In reality it has a long, rich and prosperous history. From its beginnings c.1000 it became a significant market centre for the area around, and a place on the route to London from the west. By 1500 it was among the top 60 towns in England by wealth and taxpayers, and the centre of a major industrial area, whose manufactured cloths formed part of international patterns of trade. Moreover, it is well documented particularly for the 15th and 16th century, when it was at its peak, and should provide a useful addition to the limited number of studies of small medieval towns.

Much of the old town has been swept away by the shopping centre, but something of the medieval footprint survives in its street beyond this, in a few surviving buildings and above all in its magnificent church. This book examines these features as well as the families, whether outsiders or locals, who made the most of the new thriving economic conditions, and whose dynamism helped create the town’s expansion.