Author(s)
Fay Glinister and Clare Woods and edited by J.A. North and M.H. Crawford
Series
Bulletin of the Institute of Classical Studies Supplements 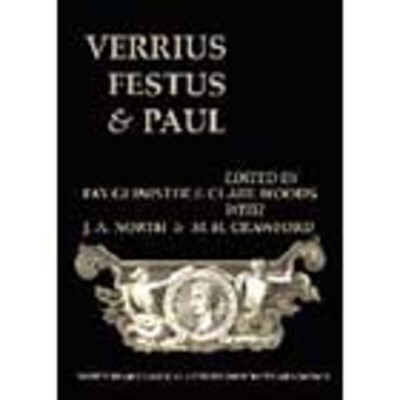 Burned, water-damaged, lost for centuries – the text we know today as ‘Festus’ barely survived to the modern era, but since its re-discovery in the fifteenth century it has exercised some of the greatest minds in the history of scholarship. Today the sole surviving manuscript lies in the airy calm of the Biblioteca Nazionale at Naples, a precious link to the great outpouring of scholarship during the last centuries of the Roman Republic.

Festus’ Lexicon took shape over several centuries through the efforts of three men in particular: Verrius Flaccus, the antiquarian who rose from humble origins to enjoy a successful career in the service of the emperor Augustus; Festus, an obscure intellectual who abridged Verrius’ monumental work, partially saving it condemning the rest to oblivion; and Paul the Deacon, the eighth-century monk whose own epitome of Festus formed part of the resurgence of interest in ancient Roman culture at the court of Charlemagne. In this volume, an international group of scholars brought together by the Festus Lexicon Project of UCL’s Department of History explores this rich, if problematic, resource. They furnish new interpretations of the text, re-evaluate the careers and scholarship of the three men responsible for its composition and offer fresh insights into its origins, development and textual transmission. Together these papers demonstrate the many ways in which this important text can be used to shed light on a wide range of historical problems.