The Signature in Law

From the Thirteenth Century to the Facsimile 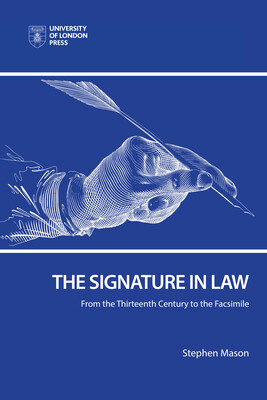 This book explores the judicial development of the concept of the signature from the thirteenth century to the age of the facsimile transmission. It puts the concept of the signature into a broad legal context to set out the purposes that can be attributed to a signature, and to explain the functions a signature is capable of performing. Drawing on cases from common law jurisdictions across the world, the book demonstrates that judges expanded the meaning of a signature as technologies developed and were used in unanticipated ways.

Following an overview of the methods used to demonstrate proof of intent and authentication, the book considers the judicial response to the array of variations in the form that manuscript signatures have been subject over the past two hundred years, from initials, partial signatures and fingerprints, to rubber stamps and typewriting. Past judicial decision-making not only demonstrates the flexibility of the form a signature can take, but also confirms that judges had the flexibility of mind to accept the first forms of electronic signature (telex, facsimile transmission) as merely one further development without the aid of special legislation.

1. An introduction to the signature

2. The functions of a signature

4. Methods of authentication before manuscript signatures

5. The form of the signature

7. An incorrect signature and absence of a signature