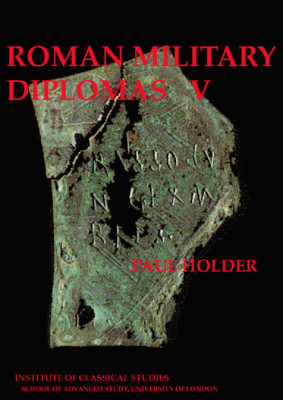 A few of the diplomas were prepared by the late Margaret Roxan and some others were found after her death in preparation. Otherwise, the intention has been to bring together diplomas published by the end of 2003. But the large number included in this volume also reflects the active interest of collectors and the results of metal detecting.

The lively market in diplomas has, however, also had less benign consequences and the volume has an important appendix on the production of fakes.

The volume continues Margaret Roxan’s Roman Military Diplomas 1954-1977 (1978), 1978-1984 (1985) and 1985-1993 (1994) which were published as Occasional Papers of the Institute of Archaeology University of London, and Roman Military Diplomas IV (2003) which was published by the Institute of Classical Studies as BICS Supplement 82. RMD IV and RMD V follow the format and continue the numbering of the diplomas and the pagination of the previous volumes.