The Metopes of the Temple of Apollo Epikourios at Bassai 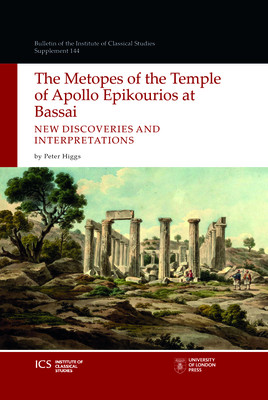 This major book brings together for the first time all of the fragments of sculpture which formed the metopes from the Temple of Apollo at Bassai. Recent research by the author and colleagues has yielded fresh discoveries in the British Museum, Athens and at the ancient site itself. Further sculptural fragments have been added to this marble jigsaw puzzle, making new joins possible and connections viable, which has greatly enhanced knowledge about the appearance and subject matter of the metopes from this famous temple. The interior frieze of the temple is much better known among scholars and the general public, but the metopes have been neglected with only one full publication including an analysis of the fragments of sculpture as part of a broader text.

The first section of the book deals with the discovery of the temple, previous scholarship, and introduces some significant and exciting new archival material never published before. The body of the book is made up of a catalogue of all fragments from the metopes, followed by a series of early drawings and artistic interpretations. The final part discusses possible subject matter, placing the sculptures into a wider artistic, cultural and social context. The book is illustrated extensively with new photographs of all the sculptures, early drawings and original reconstruction drawings.