Menander 'Misoumenos' or 'The Hated Man' 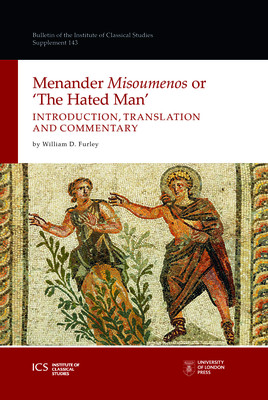 Menander’s Misoumenos, or ‘The Hated Man’, is one of his most popular plays to have survived from classical times, to judge from the numerous recovered papyrus fragments. Dating to approximately 300 BCE, it tells the story of a mercenary soldier and the captive girl he acquires whilst on campaign in Cyprus. The play follows the soldier’s growing despair as the girl spurns his advances and slowly turns against him, culminating in his suicidal thoughts.

The play belongs to the ancient genre of New Comedy, of which Menander was the acknowledged master. This edition is the fullest to date of any English language edition of the play. It aims to restore as much as possible of the action of Misoumenos, reconstructing language, stagecraft and theatrical dialogue of the original, but always distinguishing what we can be relatively sure of, from hypothesis and reconstruction. Some sections can be restored nearly fully, permitting access to brilliantly original theatrical dialogue which had been lost for over two millennia. Apart from metre and sophisticated idiom, the themes of love, despair and sadness that Menander treats are utterly timeless. This edition aims to present a significantly updated text.