Masculinity and Danger on the Eighteenth-Century Grand Tour 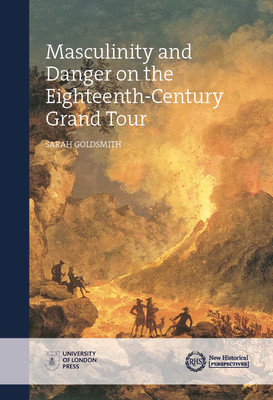 The Grand Tour was a journey to continental Europe undertaken by British nobility and wealthy landed gentry during the seventeenth and eighteenth centuries. As a rite of passage, the Tour also played an important role in the formation of contemporary notions of elite masculinity.

Examining letters, diaries and other records left by Grand Tourists, tutors and their families, this book demonstrates how the Tour was used to educate elite young men in a wide variety of skills, virtues and masculine behaviours that extended well beyond polite society. Sarah Goldsmith argues that dangerous experiences, in particular, were far more central to the Tour as a means of constructing Britain’s next generation of leaders than has previously been acknowledged. Influenced by aristocratic concepts of honour and cultures of military leadership, elites viewed experiences of danger and hardship as powerfully transformative and therefore as central to the process of constructing masculinity.

Far from viewing danger as a disruptive force, Grand Tourists willingly tackled a variety of social, geographical and physical perils, gambling their way through treacherous landscapes; scaling mountains, volcanoes and glaciers; and encountering war and disease. Through this innovative study of danger, Goldsmith offers a revision of eighteenth-century elite masculine culture and the critical role the Grand Tour played within this.

List of figures
List of abbreviations
Acknowledgements
Introduction
1. Hazarding chance: a history of eighteenth-century danger
2. Military mad: war and the Grand Tour
3. Wholesome dangers and a stock of health: exercise, sport and the hardships of the road
4. Fire and ice: mountains, glaciers and volcanoes
5. Dogs, servants and masculinities: writing about danger and emotion on the Grand Tour
Conclusion
Appendix
Bibliography
Index

One of the pleasures and a great strength of this book is that it engages the reader, chapter after chapter, with the same young men and their vividly described adventures, exploits, pleasures, illnesses and relationships. By the close I felt I knew a few of them as individuals whose distinctive character developed and at times surprised as their story unfolded... Sarah Goldsmith has written a provocative and fascinating book which asks fresh questions and offers ground-breaking insights into the ever intriguing Grand Tour. Her impressive command of the archival materials and her wide-ranging historiographical research make Masculinity and Danger a significant contribution to the scholarship on the Tour, and encourages us to rethink the construction of superior elite masculinities and the maintenance of aristocratic ideals and values.
-Reviews in History, 2021