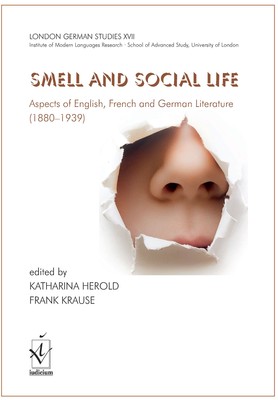 Literary references to smell in social contexts have a long tradition. However, the significant contribution of odour imagery to our moods and emotions goes largely unnoticed, which accounts for the comparatively late attention paid to smell in research into the significance of sensory images in literature. The well-known capacity of smell motifs to affirm and disrupt social and aesthetic norms cuts across historical periods, but the ways in which specific literary-historical periods renew motifs of smell in social life have remained underexplored. This volume, based on the interdisciplinary conference that took place in November 2018 at the University of London's Institute of Modern Languages Research, gives an overview of such innovations in English, French and German literature during the timespan between the 'olfactory explosion' in 1880 and the break-up of modern movements in 1939.

The Hidden Sense of Smell: Recent Scientific Findings, by Barry Smith
The Smell of Disgust: Modernism and the Social Politics of Olfaction, by Michel Delville

Smell and Ethical Values: Modern Variations of Traditional Diagnoses
Stereotyped Scents and 'Elegant Reality' in Edmond de Goncourt's Chérie (1884), by Maria Weilandt
'Follow the scent: one will seldom err': The Stench of Failed Nietzschean Practice in André Gide's The Immoralist (1902) and Thomas Mann's Death in Venice (1912), by Frank Krause
Lemon Trees, Vile Odours and No Smells at All: Olfaction in Elizabeth Bowen's, George Orwell's and Arnold Bennett's Hotels, by Susanne Schmid

The Readability of Smells: Crises, Subversions and Complications
'We are beginning to suffer indigestion from the flowers of innocence': The Subversion of Floral Fragrance in French Literature of the End of the Nineteenth Century, by Sophie-Valentine Borloz
'European noses [...] have never smelt anything like it': Satirical Scents in Paul Scheerbart's Decadent Orient, by Katharina Herold
Literary Halitosis: Bad Breath and Odol in German Literature around 1900, by Sergej Rickenbacher
James Joyce and the Legibility of Odour (or, Towards a Scratch 'n' Sniff Ulysses), by Jon Day

The Authority of Smells: Reassessments
'Brining the perfume out of everything': Vernon Lee, Scent, and Memory
Érika Wicky: A Good Eye, Taste and Flair: The Sensory Skills of the Fin-de-Siècle Collector, by Catherine Maxwell
'Dada smells like nothing': Sniffing out the Dada Corpus, by Andreas Kramer
Scents of the Mother, by Tag Gronberg