Legal and Judicial Legacies of Empire 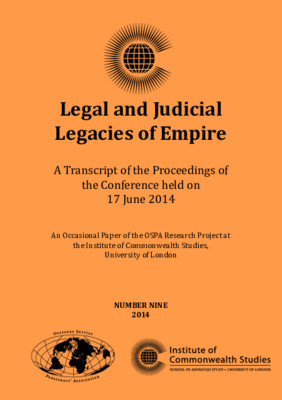 This is the record of the sixth of the later series of Witness Seminars or Conferences held by the Institute of Commonwealth Studies in conjunction with the Overseas Service Pensioners’ Association. The first four were designed to give OSPA members and other interested people an opportunity to share with an academic and non-academic audience their views and experiences relating to the end of the colonial period and the early stages of independence (the ‘End of Empire’), thus contributing to the overall Colonial Service record. The ‘witnesses’ in the fifth one were mainly people from the former dependent territories who themselves experienced the change from colonial rule to independence. This sixth ‘Conference’ relates to the later post-colonial period. All the speakers were professional legal or judicial practitioners who have observed, studied or been directly engaged in those matters as they have evolved in the various independent countries in recent years.