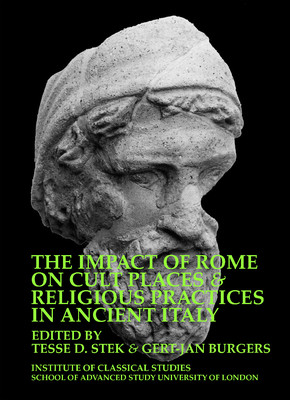 This publication of the School of Advanced Study of the University of London is one of the outcomes of the Landscapes of Early Roman Colonization project and the Colonial Rural Networks project (NWO, Dr. T.D. Stek). The volume, edited by Tesse Stek and prof. Gert-Jan Burgers of the Free University Amsterdam, explores the role of religion in early Roman imperialism.

The impact of Roman imperialism and expansionism on religious life in the newly incorporated areas has often been regarded as minimal, following the axiom of Roman ‘religious tolerance’. However, literary and epigraphic evidence points at the political and ideological importance of cult sites especially in conflict situations. Moreover, incisive changes in religious practices as well as in the cult sites where these were performed, are documented archaeologically. The causality between Roman expansionism and these trends is much discussed, and the ‘religious Romanization’ of the conquered areas is currently a key debate.

This volume explores the development of religious practices and cult places in the areas of Italy that were conquered in the Republican period, and the role of Rome and its colonies in it. Rather than denying Roman impact and intentionality altogether, it assesses the potential influences of Roman expansionism on the sacred landscapes of ancient Italy in wide and variegated terms.

The studies brought together in this volume draw on different types of evidence and approaches, reflecting also the diversity of different national and disciplinary traditions and schools of thought that often have remained isolated in current debates. It presents important new evidence from the inland Italic areas, as well as synthetic discussions addressing key scholarly controversies, such as the agency of Roman magistrates and the role of Roman colonization in ritual change and votive practices. By focusing on the dynamic interaction between authorities, local communities and wider trends in Hellenistic societies, the volume opens new perspectives on religious change in Italy and its relationship to the rise of Rome.