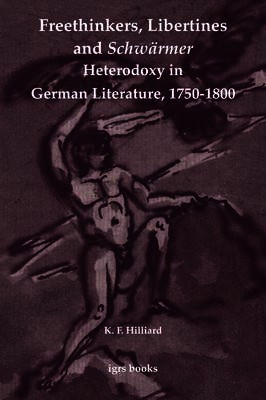 Religion mattered in the eighteenth century and has not ceased to matter since. How German writers responded to the crisis of orthodox forms of belief in the period is a matter of abiding interest. Some remained rooted in orthodoxy. Many others rejected it, often without knowing for certain what they wished to put in its place. Experimenting with alternatives in the imaginative medium of literature was one way of trying to find out. The alternatives were embodied in three main heterodox types: the philosophical freethinker, the libertine, and the Schwärmer, or heretic and dissenter. This book traces the genealogy of these types in the polemical debates of the long eighteenth century and discusses how they were used in literature, analysing works by Klopstock, Lessing, Wieland, Goethe, Schiller, Hölderlin and Novalis, among others. Not only what they wrote, but how they wrote was shaped by the demands of the historical moment. Heterodoxy thus became a determining influence on the development of German literature in the period.

K.F. Hilliard is Fellow and Tutor in German at St Peter's College, Oxford. He has published widely on eighteenth-century German literature.