Escaping from Slavery in Restoration London 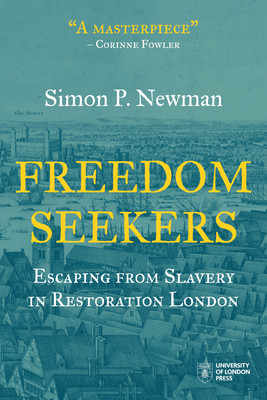 Freedom Seekers: Escaping from Slavery in Restoration London reveals the hidden stories of enslaved and bound people who attempted to escape from captivity in England’s capital.

In 1655 White Londoners began advertising in the English-speaking world’s first newspapers for enslaved people who had escaped. Based on the advertisements placed in these newspapers by masters and enslavers offering rewards for so-called runaways, this book brings to light for the first time the history of slavery in England as revealed in the stories of resistance by enslaved workers. Featuring a series of case-studies of individual "freedom-seekers", this book explores the nature and significance of escape attempts as well as detailing the likely routes and networks they would take to gain their freedom.

The book demonstrates that not only were enslaved people present in Restoration London but that White Londoners of this era were intimately involved in the construction of the system of racial slavery, a process that traditionally has been regarded as happening in the colonies rather than the British Isles. An unmissable and important book that seeks to delve into Britain’s colonial past.

"This compelling book shows us Restoration London, but not as we know it. The book is a restoration in many senses: of dignity and of global context to the world of Samuel Pepys and the Great Fire. Simon Newman humanises those who were dehumanised by people who saw them as their property. Amongst the pages of this compassionate, evidence-based masterpiece, readers will discover the stories of freedom-seeking enslaved people in familiar places all over London, from Aldgate, Covent Garden and Greenwich to Fleet Street, Wapping and the East End. Through painstaking archival work these lives have been impressively reconstructed and reimagined, all underpinned by archival and interpretative rigour."
—Professor Corinne Fowler (Director of Colonial Countryside: National Trust Houses Reinterpreted)

"There has long been a popular assumption that English slavery was a colonial phenomenon, alien to the liberty loving peoples residing in the British Isles. Newman turns that notion inside out. His painstaking research and luminous interpretation reveal a community of enslaved Black people in Restoration England, yearning to escape. Evocative prose and interactive illustrations enable us to imagine their flights on the streets of London, and also to perceive the arterial network of enslavers, merchants, investors, ship captains, and printers, who devised a novel way to repossess them: the runaway slave advertisement. Fashioned in the cradle of the liberal ideal, this artifact of business news would become one of the most iconic and tyrannical innovations of the age of empire and enslavement—and the clearest lasting proof of the countervailing will to freedom."
—Vincent Brown, author of Tacky’s Revolt: The Story of an Atlantic Slave War

"Brimming with revelations at every turn, Freedom Seekers reorders our understanding of the making of racial slavery, finding the early traces of British exploitation of Black people in the streets, squares, lanes, and alleyways of the expanding metropolis. Simon Newman gives us a new way of seeing British slavery, one in which Black and Asian captives risked their lives for freedom across the Atlantic and on both sides of the Thames. With prodigious research into decades of newspaper advertisements of ‘runaways’, illuminating story-telling, copious illustrations and, most of all, sensitive attention to the humans hidden in print, this book is powerful proof that racial slavery in British history has never ever been only a colonial matter."
—Matthew J. Smith (Director, Centre for the Study of the Legacies of British Slavery, UCL)