The East Pediment of the Parthenon - From Perikles to Nero 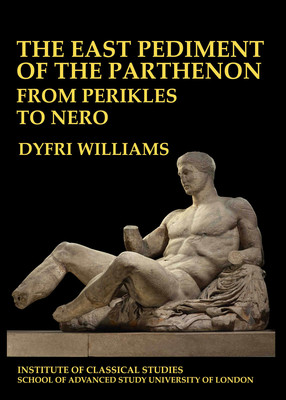 The sculptural decoration of the Parthenon, conceived at the height of Athens’ power, was deeply rooted in the culture and aspirations of the city-state. The group of huge figures carved completely in the round and set in the triangular gable at the east end, the front of the temple, were perhaps among the most important.

This new study by Dyfri Williams uses all the visible clues provided by the sculptures and the floor blocks on which they were once mounted to reconstruct the figures and the way they interacted. Securer identifications for the figures are thus reached and a better understanding of the allusive way the pediment’s subject, the birth of Athena, was treated. To aid the process, a series of sketch-drawings of each figure seen from the front, combined with a bird’s eye sketch of it in place on the pediment floor, has been prepared by Kate Morton.

Detailed observation and analysis lead to an unexpected identification of the superb Figure D, shown on the cover, that opens up new ways of reading the remaining groups. It also reveals how the arrangement of the sculptures that has come down to us is in fact Roman rather than Classical, for several sculptures were disturbed by a rarely mentioned Roman repair. Finally, a highly intriguing historical context is suggested for this repair and its motivation.