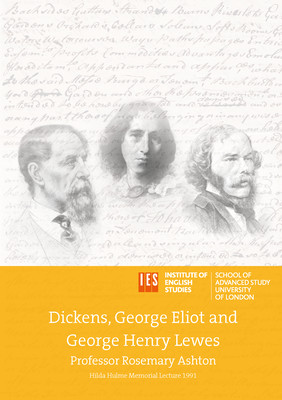 When the Victorian journalist and critic, George Henry Lewes invited George Eliot and Charles Dickens to dinner in 1859, few imagined it would lead to one of the greatest creative exchanges in literary history.

From the non-traditional ‘marriage’ of Eliot and Lewes, to the unconventional eye Lewes cast over Dickens’ work, this book throws fresh light on the chief subject of their critical interest by looking at the complex relationships between Dickens, Eliot and Lewes. It contends that Lewes saw something in Dickens and Eliot that his contemporaries could not grasp, and traces the birth of ‘psychological realism’ as a literary device in English literature.

The book is based on a lecture given as part of the Hilda Hulme Memorial Lectures, established in 1985 following a donation from Mr Mohamed Aslam in memory of his wife, Dr Hilda Hulme. The lectures are on the subject of English literature and relate to one of ‘the three fields in which Dr Hulme specialised, namely Shakespeare, language in Elizabethan drama, and the nineteenth-century novel’.

This lecture by Professor Rosemary Ashton was originally published by the Institute of English Studies, University of London in 1991.