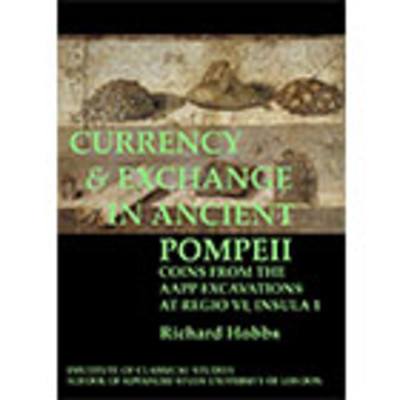 Currency & exchange in ancient Pompeii examines how coinage became a key component of the economic life of the town from the third century BC to the dramatic destruction of Pompeii by the eruption of Vesuvius in AD 79.

The study discusses one of the largest assemblages of coins found so far from below the layer of destruction of AD 79. Over 1,500 coins were found during a ten-year campaign of excavation of Regio VI, Insula 1 by the Anglo-American Project in Pompeii (AAPP).

Currency & exchange in ancient Pompeii  looks at the range of coins found, from mints across the Mediterranean, reflecting Pompeii’s wide-ranging trade connections, in particular, Ebusus, Massalia, and Rome, and the development of local imitations, many unique to Pompeii.

The book reviews other evidence for Pompeii’s economic life, such as the price of goods and services, the activities of bankers and money-lenders, and the ‘live’ coinage left behind by those fleeing the volcano. A full catalogue of the AAPP assemblage and the ‘Bathhouse hoard’ is included, with illustrations of many of the coins.

The book is an invaluable resource for all interested in Pompeii, its economy, and the everyday life of its ‘small change’.