Classics in practice. Studies in the history of scholarship (BICS Supplement 128) 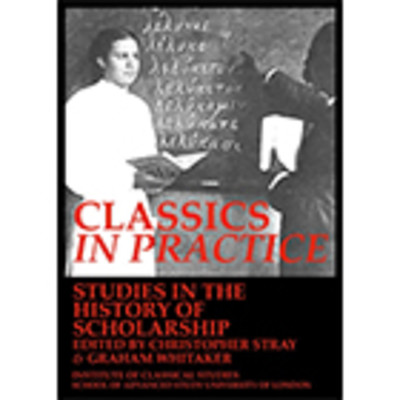 This special Bulletin Supplement contains seven essays which deepen and extend our knowledge of classical reception and the history of scholarship. Two of them deal with books: John Davies examines a little-known life of the tyrant Agathocles of Syracuse published in the 1660s in which the more recent ‘tyrant’, Oliver Cromwell, is targeted, while Christian Flow surveys the agendas and self-images of Latin lexicographers from the Estiennes in the sixteenth century to the Thesaurus Linguae Latinae, still in progress.

Three essays are devoted to classical journals: Graham Whitaker surveys German nineteenth-century periodicals in relation to F. A. Wolf’s conception of Alterthumswissenschaft; Ward Briggs gives an account of The American Journal of Philology and of its founding editor Basil Gildersleeve; drawing on previously unpublished correspondence, Christopher Stray describes the controversy between W. S. Watt and Shackleton Bailey over their editing of Cicero’s letters, as played out in the pages of the Classical Review and the Proceedings of the Cambridge Philological Society. Two essays focus on the classical scholarship of African-Americans: Kenneth Goings and Eugene O’Connor tell the story of the rise of classical programmes in US black colleges, together with the funding difficulties and prejudice that such programmes faced, while Michele Valerie Ronnick provides a survey of writings on classics by scholars of African descent from the sixteenth to the twentieth century.

The range of these essays is wide, covering 500 years, and dealing with scholarly production in Britain, Germany, the USA and elsewhere.