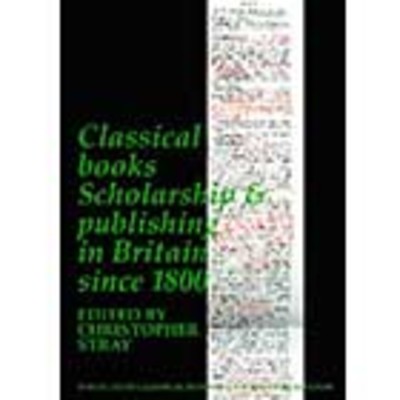 Classical Books explores the interface between the history of books and the history of classical scholarship. Its contributors investigate the background to the production of texts, editions, histories and dictionaries many of which are now taken for granted by scholars. Abandoned authors blind alleys, false starts and fierce competition: Classical Books takes us behind the placid facades on library shelves to the processes of commissioning, writing, editing, design and printing which led to the publication of the books we use. Some of the books discussed were the work of major figures in nineteenth- and twentieth-century scholarship B Jowett, Murray, Jebb, Wilamowitz B but many lesser-known scholars also feature in these accounts. Several of the books discussed, including the OCTs, CAH and Liddell and Scott, were produced by the university presses of Oxford and Cambridge, but commercial publishers like Longman, John Murray and Macmillan are also discussed, while the new University of London also features as a centre of scholarship and publishing. Finally German scholarship (the Teubner classical texts and Pauly’s Real-Encyclopädie, for example) is a constant presence, at once exemplar and rival. Classical Books is based on papers given at a conference held at Trinity College, Cambridge, in 2006