An Examination of Power and Translation 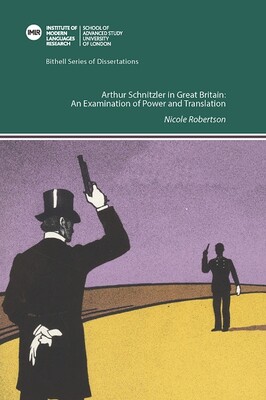 Arthur Schnitzler (1862-1931), one of the major figures of European modernist literature, enjoyed domestic and international success during his lifetime and posthumously, yet the arrival of his dramatic works in Great Britain was plagued by false starts, short runs and inconsistencies. It was only with Tom Stoppard’s adaptations of Das weite Land and Liebelei, that Schnitzler’s plays were produced at the National Theatre  ─ Undiscovered Country (1979) and Dalliance (1986).

Nicole Robertson’s enquiry into the whys and wherefores of that dilatory dissemination unearths and examines evidence of power in transcultural and translingual migrations. Translations, critical reviews, correspondence and unpublished drafts from the end of the 19th century to the present day are analysed, providing a comprehensive overview of the process of translating from page to stage. By focusing on ‘power’ in its various guises, the author includes authorial, custodial, linguistic and legal assertions over the text and, in particular, traces of the control exercised by the author, his son and their various agents which highlight the multi-layered authorship discernible in the performed or published word. This examination of Schnitzler's reception in Great Britain presents exhaustive and detailed scholarship on a fascinating, if far from smooth, journey.

Nicole Robertson completed her PhD at University College London, and now lives in Cambridge, where she teaches German.