Anti-Communism in Britain During the Early Cold War 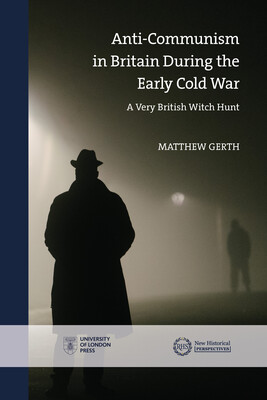 The Cold War produced in many countries a form of political repression and societal paranoia which often infected governmental and civic institutions. In the West, the driving catalyst for the phenomenon was anti-communism. While much has been written on the post-war American red scare commonly known as McCarthyism, the domestic British response to the ‘red menace’ during the early Cold War has until now received little attention. Anti-Communism in Britain During the Early Cold War is the first book to examine how British Cold War anti-communism transpired and manifested as McCarthyism raged across the Atlantic.

Drawing from a wealth of archival material, this book demonstrates that while policymakers and politicians in Britain sought to differentiate their anti-communist initiatives from the ‘witch hunt hysteria’ occurring in the United States, they were often keen to conduct – albeit less publicly – their own hunts as well.  Through analysing how domestic anti-communism exhibited itself in state policies, political rhetoric, party politics and the trade union movement, it argues that an overreaction to the communist threat occurred.  In striking detail, this book describes a nation at war with a specific political ideology and its willingness to use a variety of measures to disrupt or eradicate its influence.