The Afterlife of Herodotus and Thucydides 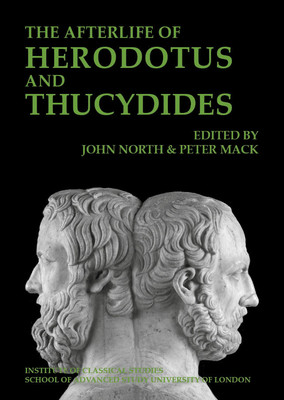 Herodotus of Halicarnassus and Thucydides the Athenian were the two most famous and earliest (fifth century bce) of the Greek historians whose work survives; their subject was the wars between the Greek cities and the Persian Empire and later those between the Greek cities themselves. Their names are frequently linked and their work compared and contrasted: Herodotus’ history ranged adventurously both in space and time; Thucydides limited himself to the events of his own day. Herodotus’ work is certainly more fun to read; Thucydides approaches more closely to the modern conception of ‘scientific’ history-writing.

This book seeks to explore the reception of their writings from the Byzantine era until today, following the ups and downs of their scholarly reputations. Herodotus has at times been much despised and only recently reassessed and taken more seriously. Thucydides has been more consistently revered, even if sometimes thought narrow and boring. Today, he still attracts readers from disciplines far from the classical world. The essays in this collection range from Sir Walter Ralegh’s History of the World and Isaac Newton’s Chronology to the coming of narratology.

From Thucydides to Lucretius: the Plague of Athens, between medicine and classical scholarship in Renaissance Italy

The Byzantine reception of Herodotus and Thucydides

Herodotus and Thucydides in Procopius’ Wars

Herodotus and Thucydides in Walter Ralegh’s History of the World

Thucydides and the English Renaissance education

A Protestant Thucydides in Reformation Germany

A mathematician among the classics: Isaac Newton as a reader of Herodotus

Herodotus and the perception of the Persian empire. Some observations from a historical and methodological perspective

The resurgence of Herodotus and the new philosophy of history

The modernity of Thucydides