The Afterlife of Cicero 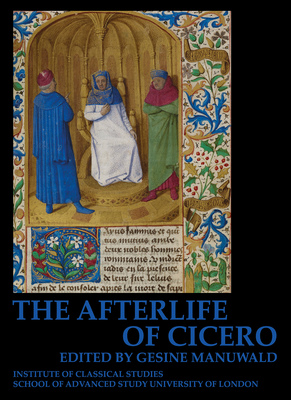 Cicero was one of the most prolific and productive figures from ancient Rome, active as both a politician and a writer. As yet however modern scholarship does not do justice to the sheer range of his later influence. This volume publishes papers from a conference which aimed to enlarge the basis for the study of Cicero’s reception, by examining in detail new aspects of its variety. The conference was held in May 2015, and was jointly organized by the Institute of Classical Studies, the Warburg Institute, and the Department of Greek and Latin at University College London.

The book presents twelve case studies on the reception of ‘Cicero the writer’ and ‘Cicero the man’, ranging from thirteenth-century Italy to nineteenth-century England, including colonial Latin America. Scholars from different disciplinary backgrounds discuss artistic and literary responses to Cicero as well as his exploitation in philosophical and political debates. Taken together, these studies illustrate how the special characteristics of the historical Cicero colour his reception: his afterlife is one of the most varied and wide-ranging of any classical author.