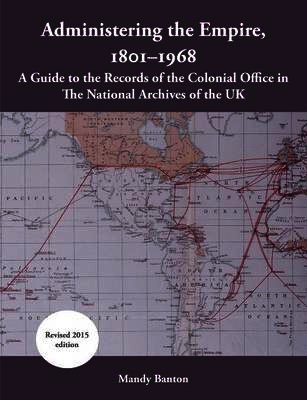 Administering the Empire, 1801-1968 is an indispensable introduction to British colonial rule during the nineteenth and twentieth centuries. It provides an essential guide to the records of the British Colonial Office, and those of other departments responsible for colonial administration, which are now held in The National Archives of the United Kingdom.

As a user-friendly archival guide, Administering the Empire explains the organisation of these records, the information they provide, and how best to explore them using contemporary finding aids. The book also outlines the expansion of the British empire from the early nineteenth century, and discusses the structure of colonial governments. An appendix lists countries alphabetically giving brief details of their constitutional histories under the British and listing the categories and approximate numbers of the documents to be found for each, thus giving Commonwealth citizens an idea of the wealth of relevant material in the UK, much of which is not duplicated in their own countries.

First published in 2008, and updated and revised in 2015, Administering the Empire is available from 2020 both in print and online as an open access edition, reissued by the Institute of Historical Research and University of London Press.

Dr Mandy Banton is a Senior Research Fellow of the Institute of Commonwealth Studies, at the School of Advanced Study, University of London, and a former Principal Records Specialist (Diplomatic and Colonial) at The National Archives, UK.

4. Administration of British colonial affairs before 1801: the organisation in London

5. Administration of the colonies from 1801

6. The records of the Colonial Office

7. Records of the Dominions Office and Commonwealth Relations Office

9. Private papers and private office papers relating to colonial affairs held in records of the Colonial Office and of other government departments

12. Records of other government departments