The Neglected Decade: legal issues of the 1950s 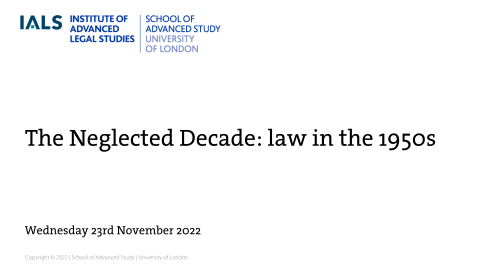 The 1950s tend to be regarded as a very conservative decade, in contrast to the more radical 1960s and 1970s; yet there was considerable legal development, for example in the use of equity in the courts, in the movement for divorce and homosexual law reform, in the admission of women to the judiciary and the House of Lords, and in ideas about criminal justice.

Legal history has been gaining in popularity in recent years but remains largely undeveloped in UK law schools, especially with respect to more recent history (and the 1950s qualify as ‘more recent’ to legal historians). This conference offers a rare opportunity to explore legal issues which arose in the mid-twentieth century.

Speakers have submitted original and varied abstracts on topics including: The Great London Smog 1952, The 1950s Railway Modernisation Plan, the Wolfenden Report and the Sexual Offences Act 1956, divorce law reform, the Rent Act 1957, Law on the Radio in the 1950s, leaseholds and the Landlord &Tenant Act 1954, the Life Peerages Act 1958 & the admission of women to the House of Lords and the takeover battle for the Savoy Hotel 1953.