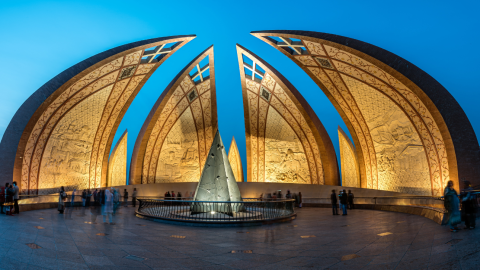 Pakistan, a nuclear armed state faces multiple crises@75. Since Prime Minister Imran Khan was voted out of office in April 2022, political power deadlock, a divided society and extreme political polarisation has persisted. In addition, 33 million Pakistanis have been displaced by the colossal floods this monsoon season (during which one third of the country was inundated); this environmental catastrophe has devastated the already struggling economy. To discuss the complex and disturbing events in Pakistan, the Institute of Commonwealth Studies, University of London hosted a highly acclaimed panel of speakers on 1 November 2022.

Mr Sethi predicted the contestation between Mr Khan and the military will continue. In his view, Mr Khan came into Pakistan’s top political position with the help of the powerful military. While Khan was in office, differences grew between the Prime Minister and the military establishment, resulting in Khan eventually losing their support. Consequently, when the political opposition wanted to pursue a vote of no –confidence against Khan, the military establishment did not intervene; and since then it has expressed its neutrality in the political standoff. When Khan was voted out, he and his party PTI resigned from the National Assembly and began street protests, demanding an early election while pressing the top military establishment to support his return to power. On 28 October 2022 Khan started a protest march from Lahore to Islamabad, demanding an early election. The current government is refusing these demands, while the military remains neutral. According to Mr Sethi the political stalemate continues with a real danger to Pakistan’s domestic security, polity and economic situation.

Historically there is a distinct polarisation between state elites and the political elites which is embedded in Pakistani political discourse, especially amongst the urban middle class/ lower middle class. In this narrative, politicians are always portrayed as corrupt and non-credible while, in contrast, the military is glorified. This narrative is particularly strong in the current Pakistani political discourse. The two mainstream political parties (PMLN and PPP), and their leaders are thought to be corrupt and incompetent by the urban masses. Moreover, dynastic politics have further alienated the middle class and youth in Pakistan. Imran Khan as a third political force gave birth to cult politics in Pakistan. His followers perceive him as a messiah figure, capable of achieving rapid solutions to Pakistan’s enduring political and economic problems. Professor Waseem discusses these historic dynamics this in great detail in his recent book, Political Conflict in Pakistan (Hurst Publishers, 2022)

The Pakistan judiciary has made progress fairly and evenly, trying to inculcate the values and precepts enshrined in the constitution of Pakistan. Pakistani judges are not allowing themselves to be influenced by the highly charged political environment. Instead, there is a determined effort in the judiciary that people who are democratically elected, should govern – meaning implementation of their elected mandate and manifesto; if they choose to rule, politicians must act within the limits that the law prescribes. Unfortunately, Pakistan after 75 years has not been able to develop robust capacity and ethos of governance; this is where the judiciary may be able to guide and advise. There has been progress in terms of gender representation in the judiciary: Pakistan has a first female chief Justice in Baluchistan, a province where the number of female advocates is much less in comparison to other provinces.

Although there is substantial parliamentary representation of women in Pakistani politics, women still have a long way to go before becoming an active force of political change in Pakistan. As the recent by-elections showed, the female voter turnout is still very low. Polling indicates that the women who vote usually back the political party or candidate chosen by the male head of the family. Therefore, the concept of citizen rights and the independence to back their preferred political party or political candidate remains elusive. However, there are some hopeful signs that women have started to own and demand their space and identity. One such example is that of ‘Aurat March’ (Women’s March) where young urban women have started to participate more actively in protest politics whereby they are raising questions around gender equality and performative practices.

The full debate is available in the video below